Though you have not seen him, you love him; and even though you do not see him now, you believe in him and are filled with an inexpressible and glorious joy, 1 Peter 1:8 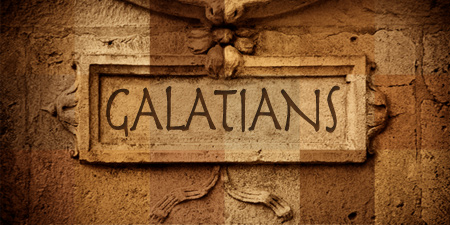 Authorship, Background, and Contents of Galatians

Paul’s authorship of Galatians has never seriously been questioned. It is quoted or alluded to in 1 Peter. References occur in many of the earliest Christian texts, including the Epistle of Barnabas, 1 Clement, and the Epistle of Polycarp to the Philippians; also in the writings of Justin Martyr, Irenaeus, Clement of Alexandria, and Origen, along with the earliest lists of New Testament books. The evidence of authenticity is overwhelming.

The Impact of Galatians

According to any standard, Paul’s letter to the Galatians has changed world history. It powerfully shaped the Christian faith from the beginning, as Paul combatted opponents who would have defined the church as a mere subset of Judaism. It has been a fortress of the faith against those who wished Christianity to meld into the rest of the world’s religions.

During the Protestant Reformation of the 16th century, Galatians again was a sharp sword in the hands of the Reformers. Martin Luther wrote two commentaries on the letter, which influenced people from his day till ours. He was so wedded in heart to the power of the letter that he jokingly named it after his wife, calling it “my Katy von Bora.”

During the revival of evangelical faith in the 19th and 20th centuries, once again it was Galatians that was heavily relied upon to fight against liberalism and legalism in the church, and it will continue to be so until the Lord returns. No wonder Galatians has often been called “the Magna Carta of Christian Liberty.”

One of the strangest things about Galatians is that no one knows for sure who Paul was writing to. How can that be, in light of the fact that it opens with “Paul … to the churches of Galatia”?

The problem is created because “Galatia” has two possible meanings. Three centuries before Paul, Celts (also called Gauls) from the west had migrated to what is now north-central Turkey. The area became known as Galatia after the ethnic Gauls who settled there. But later, the Roman government created a province called Galatia, which included ethnic Galatia in the north, but also an area in the south. The question is whether Paul is using the ethnic or provincial meaning of the word.

Scholars are divided over the issue, but students need worry little about it. It is relevant for identifying some historical questions, such as which visits to Jerusalem Paul refers to in Galatians 1-2, but it does not affect any of the doctrinal teaching of the letter. The powerful message of Galatians continues to do its work, even though we are uncertain of the historical details.

Something clearly is very wrong in Galatia. Unlike most of his letters, Paul does not begin with offering praise and thanks for his recipients’ faith. In this case he comes straight out the chute battling:

I am astonished that you are so quickly deserting the one who called you by the grace of Christ and are turning to a different gospel. (1:6)

There could hardly be a more serious charge than desertion of God and of Christian faith, but that is what Paul implies. He doesn’t stop there. Paul pronounces a curse on whoever is influencing them away from the gospel:

But even if we or an angel from heaven should preach a gospel other than the one we preached to you, let him be eternally condemned. (1:8)

Paul doesn’t exhaust his vehemence in the opening. He continues to speak as strongly against his opponents until the end of the letter. Right away, we can see not only that the apostle is very upset, but what the core issue is: It’s no less than the content of the gospel itself.

Sometime after Paul founded these churches, other teachers had visited and contradicted his teachings. From Paul’s comments and counterarguments, we can learn some of their position. They taught that Gentiles could not simply trust in Christ for salvation. They must accept the yoke of the Law, including circumcision, dietary regulations, and calendar observances. In essence, they must become Jews in order to become Christians. These teachers therefore have been traditionally labeled “Judaizers.” The truth of the gospel was at stake.

There is a common tactic in debate that the Judaizers also employed, called an ad hominem attack. Ad hominem means “to the man.” In practice it refers to undermining an opponent’s argument through attacking the credibility of the person. Along with the gospel message itself being attacked in Galatians, these teachers also attacked Paul’s credentials as a genuine apostle.

In Galatians, therefore, Paul is forced to argue on two fronts: He must defend his credentials as an apostle, and defend the true gospel that gives eternal life and liberty.

Paul spends the first two chapters answering accusations about himself, then turns to the gospel message, which he emphasizes in chapters 3-6.

Paul’s Defense of His Apostleship

In their attack on Paul himself, the Judaizers had apparently made three charges, each one of which Paul addresses:

I want you to know, brothers, that the gospel I preached is not something that man made up. I did not receive it from any man, nor was I taught it; rather, I received it by revelation from Jesus Christ. (1:11)

Fourteen years later I went up again to Jerusalem … and set before them the gospel that I preach among the Gentiles. . . . This matter arose because some false brothers had infiltrated our ranks to spy on the freedom we have in Christ Jesus and to make us slaves. (2:1-5)

At this meeting there was total unity among the apostles:

On the contrary, they saw that I had been entrusted with the task of preaching the gospel to the Gentiles, just as Peter had been to the Jews … James, Peter, and John, those reputed to be pillars, gave me and Barnabas the right hand of fellowship when they recognized the grace given to me. (2:7-9)

As to the other charge (the “rumor”), Paul tells the true account of what happened in Antioch in 2:11-21. Paul had indeed publically rebuked Peter, but it was because Peter had been wrong in a very critical matter: Whether or not the Gentiles were fully acceptable as fellow members of the church. Peter had been (temporarily) wrong; Paul had been right. The same issue was now being reproduced in the churches of Galatia, and Paul once again confronts this matter of critical importance.

Paul’s Defense of the Gospel

The message Paul taught was the main issue. He argues for the truth of his gospel from a number of angles:

Consider Abraham: “He believed God, and it was credited to him as righteousness.” Understand, then, that those who believe are children of Abraham.

It is not by Law that anyone, in the Old or New Testament periods, is justified. Only by faith in any age has anyone been accepted by God. Therefore the argument of the Judaizers is flawed from the start.

Second, God intended all along to provide salvation for the whole world, and it was announced at Abraham’s call. Then why was the Law of Moses given to Israel, if salvation by faith was the plan from the start? Paul answers that it was a temporary educational and disciplinary vehicle for Israel until the Messiah would come and accomplish redemption from sin. Now that he has done so, the Law’s purpose is over. In 4:1-7, Paul compares the Law to a guardian over a small child that imposes discipline until he matures. But when the boy becomes a man, the guardian’s role is over. Therefore, for Israel or the Gentiles to return to living by Law would be a like a grown man returning and submitting to the management of a nanny.

On the basis of these arguments, Paul vigorously exhorts the Galatians to stand firm in their liberty in Christ, a freedom that can only be based on grace.

It is for freedom that Christ has set us free. Stand firm, then, and do not let yourself be burdened again by a yoke of slavery. (5:1)

To return to Law is to fall from the freedom of grace to slavery through trying to live by Law — the meaning of the warning against “falling from grace” in 5:4.

The Holy Spirit: Why Legalism Is Unnecessary

One of the most important lines of argument presented by legalists through history is the charge of antinomianism (literally, “against law”) — the charge that if the Law is not imposed on Christians, they will live lawless, godless lives.

Paul’s response is to assert that this is a complete misunderstanding. In removing the Law as his people’s taskmaster, God has not left us without guidance. In fact, God has given us far more than anything law could give: He has given us his very own Spirit, the Spirit of God indwelling us. In saving us, the Lord did not leave us as we were. He has called us to entirely new plane of living:

For through the law I died to the law so that I might live for God. I have been crucified with Christ and I no longer live, but Christ lives in me. The life I live in the body, I live by faith in the Son of God, who loved me and gave himself for me. (2:19-20)

The usual order that “religion” or legalism teaches can be summarized, “Clean up your flesh and you will be spiritual.” According to Paul, the truth is the other way around:

Those who walk according to the Spirit will be directed and empowered to concentrate on the spirit of what the Law was always aiming at, which is love. Therefore, Christians are urged to not only defend their liberty in Christ, but to use it properly according to the power of the Holy Spirit:

You, my brothers were called to be free. But do not use your freedom to indulge the sinful nature; rather, serve one another in love. The entire law is summed up in a single command: “Love your neighbor as yourself.” (5:13-14)

The study of Galatians is one of the must liberating, empowering, enlightening, and nutritious pursuits a believer can choose. There is a reason this book, again and again, has been at the forefront of revivals and reformations through Christian history.

One of the great teachers of a century ago was C. I. Scofield. In a series of lectures on Galatians at a Bible conference in 1903, he said:

The course of this demonstration is like the resistless march of an armed host. Nothing can stand before it. The flimsy quibblings of ancient and modern legalists are scattered like the chaff of the summer threshing floor. But this march is, like that of a well-ordered army, by definite stages. It is an invasion in which every vantage point is fortified and made a solid base for the next advance.

While the experiences that stimulated this letter were no doubt painful and stressful for Paul, we can give thanks forever that they resulted in Galatians. Study it for yourself and discover what so many believers have found before — Liberty in Christ.