We are in a war, but it’s not the war we are trying to fight.

It’s not a war between Republicans and Democrats.

It’s not a war between conservatives and liberals.

It’s not a war between Christians and Muslims.

It’s not a war between gay and straight.

These are the wars we are fighting in the Christian world I live in, but they are the wrong wars, the wrong battlefields, attacks against the wrong enemies.

“For we are not fighting against flesh-and-blood enemies, but against evil rulers and authorities of the unseen world, against mighty powers in this dark world, and against evil spirits in the heavenly places.”  -Ephesians 6

I’m sure our real enemies are thrilled with the shadow boxing we are doing….swinging at what is not the real enemy at all…and all the while our unseen enemy continues the fight.

The real battlefield is spiritual.

The real enemy is the devil and his angels.

The real war is fought in prayer and with love for others.

The Christian world I live in has chosen to fight the wrong war, focus on what is not the enemy,  oppose what isn’t the real problem at all….and all the while the real enemy prospers and smiles at our foolishness.  He has masterfully misdirected our attention at the wrong things. We are in a war of the worlds….I pray we realize who the real enemy is and focus our attacks in the right way, with the right weapons at the real enemy. 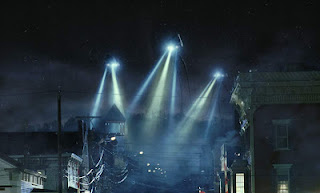 In this war of the worlds I pray we see what the real war is about, who the real enemy really is and how we are to respond.  The real war is for the souls of men, the real enemy is the devil, and the proper response for us is love and prayer.  Those are the “weapons” that will change the culture around us and deal a death blow to the enemy’s plans.