The letter begins with “Paul, Silas and Timothy, to the church of the Thessalonians in God the Father and the Lord Jesus Christ: Grace and peace to you” (1:1). Paul occasionally associates others’ names with his own in addressing his letters (2 Thessalonians, Philippians), but the true author is Paul.

First Thessalonians has been universally accepted as Pauline from the beginning. It is cited by Ignatius between A. D. 109-114. It was included in the earliest canonical lists (lists of inspired New Testament Scriptures), and was quoted and mentioned by name by prominent 2nd and 3rd century Christian writers, such as Irenaeus, Tertullian, and Clement of Alexandria. Other than the radical German critics of the 19th century, its authenticity has been assumed by all.

First Thessalonians stands out also among New Testament writings in that it can be precisely dated. There are two extra-biblical historical markers that provide brackets for located it. Paul write from Corinth shortly after arriving there (see Background), giving us the first date. We are told in Acts 18:1-2:

After this, Paul left Athens and went to Corinth. There he met a Jew named Aquila, a native of Pontus, who had recently come from Italy with his wife Priscilla, because Claudius had ordered all the Jews to leave Rome.

This same event was recorded by the Roman historian Suetonius in his lives of the 12 Caesars (about A.D. 121):

Because the Jews at Rome caused continuous disturbances at the instigations of Chrestus, he expelled them from the city.

This event has been reliably dated around the year A.D. 49. Most historians accept that the comment on some agitator named “Chrestus” actually refers to Christ, which Suetonius had misunderstood. The “disturbances” were really probably disputes between Jewish Christians and non-Christian Jews in Rome about Jesus that were heated enough to draw the attention of the emperor. At any rate, that gives us A.D. 49 as the first bracket to locate the date of this letter.

So Paul stayed for a year and a half, teaching them the word of God. While Gallio was proconsul of Achaia, the Jews made a united attack on Paul and brought him into court. “This man,” they charged, “is persuading the people to worship God in ways contrary to the law.” (Acts 18:11-13)

A stone inscription found by archaeologists confirms that Gallio was appointed proconsul of Achaia in the summer of A.D. 51. That gives us the outer marker. Since Paul probably wrote 1 Thessalonians early in his ministry at Corinth, the time of writing was probably the Spring of A.D. 50, though a year plus or minus is possible.

First Thessalonians is therefore at least the second-earliest letter of Paul in the New Testament; the earliest, if Galatians is dated in the 50s as some scholars believe. This letter gives us convincing historical evidence of what Paul taught and Christians believed only two decades after Jesus’ death and resurrection (usually dated either A.D. 30 or 33). Contrary to skeptical theories about “the long, gradual development of Christian beliefs,” this short letter shows the presence of every significant New Testament doctrine, demonstrating that the gospel has been preached in its fullness from the very beginning. 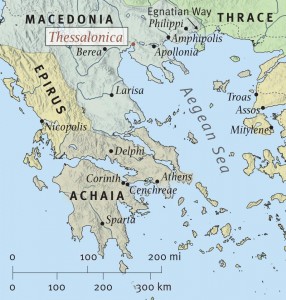 There is remarkable harmony between 1 Thessalonians and the description of Paul’s ministry and movements in Acts 17-18. The founding of the church in Thessalonica is described in Acts 17:1-4:

When they had passed through Amphipolis and Apollonia, they came to Thessalonica, where there was a Jewish synagogue. As his custom was, Paul went into the synagogue, and on three Sabbath days he reasoned with them from the Scriptures, explaining and proving that the Christ had to suffer and rise from the dead. “This Jesus I am proclaiming to you is the Christ,” he said. Some of the Jews were persuaded and joined Paul and Silas, as did a large number of God-fearing Greeks and not a few prominent women.

Some Bible students have take the statement “on three Sabbath days” to indicate that Paul had stayed in Thessalonica only three to four weeks. This is probably a misunderstanding, however. It is more likely that he then left his attempts in the synagogue and moved out to do work significantly with the Gentiles for many more weeks. More time would probably have been needed to win “a large number of God-fearing Greeks.”

First Thessalonians contains indications that Paul did indeed stay longer than 3-4 weeks. For example, in 2:9 he speaks of his personal example, demonstrating his willingness to work for his own support rather than receiving from them — an example that would have taken longer to demonstrate. Second, in Philippians 4:15-16 Paul reminds the Philippians that they had sent financial support to help him in Thessalonica at least twice, if not more, indicating a longer stay to allow for several 100 mile journeys between the cities. Paul’s stay in Thessalonica was a relatively short, but probably a few months rather than weeks.

But the Jews were jealous; so they rounded up some bad characters from the marketplace, formed a mob and started a riot in the city. They rushed to Jason’s house in search of Paul and Silas in order to bring them out to the crowd. But when they did not find them, they dragged Jason and some other brothers before the city officials, shouting: “These men who have caused trouble all over the world have now come here, and Jason has welcomed them into his house. They are all defying Caesar’s decrees, saying that there is another king, one called Jesus.” When they heard this, the crowd and the city officials were thrown into turmoil. Then they made Jason and the others post bond and let them go.

Knowing that Roman authorities had no interest in intervening in what they saw as internal Jewish divisions (see Acts 18:12-16 for a failed attempt by Jewish leaders to do so), Paul’s opponents aimed their attack where Rome was sensitive. The basic “loyalty oath” of the Roman Empire was contained in the assertion, “Caesar is lord.” Christians were seen as insurrectionists because of their counter-assertion, “Jesus is Lord.” There was a great deal of religious tolerance in the Roman Empire, but there was absolutely no tolerance regarding who was lord. The charge that Christians were proclaiming “another king” was certain to get the authorities’ attention. In this case, they demanded a sort of “peace bond” from Jason, to be forfeited if there were more trouble. This led Paul to leave town.

The circumstances of his departure naturally caused Paul to have anxious concerns about the church he left behind. Acts says he sent Timothy back to check on the condition of the church while he continued to Athens and Corinth.

When Silas and Timothy came from Macedonia, Paul devoted himself exclusively to preaching, testifying to the Jews that Jesus was the Christ.

These same movements are mentioned in 1 Thes. 3:1-7

So when we could stand it no longer, we thought it best to be left by ourselves in Athens. We sent Timothy, who is our brother and God’s fellow worker in spreading the gospel of Christ, to strengthen and encourage you in your faith … But Timothy has just now come to us from you and has brought good news about your faith and love. He has told us that you always have pleasant memories of us and that you long to see us, just as we also long to see you. Therefore, brothers, in all our distress and persecution we were encouraged about you because of your faith. (3:1-2, 6-7)

So, having heard good news about the persevering faith of the Thessalonians, Paul rejoices. But Timothy has also brought news that they need answers to questions and confusion, so Paul addresses them in this letter of encouragement.

Though brief, 1 Thessalonians is full of profound teaching from the apostle. As said above, every major New Testament doctrine is mentioned in this letter. Along with doctrinal teaching, there are also strong exhortations for believers to live according to God’s will.

Watch for some of the following themes:

The apostle Paul was surely one of the most active preachers of all time, but he never accepted credit for the conversion of his listeners. He always preached Christ in complete dependency on the Lord, and always attributed the “success” of his preaching to the converting work of the Holy Spirit. See 1:5

In the first chapter, Paul describes the publicly obvious conversion of the Thessalonians, and the description is striking:

… you turned to God from idols to serve the living and true God, and to wait for his Son from heaven, whom he raised from the dead—Jesus, who rescues us from the coming wrath. (1:9-10)

Notice the elements: 1) they turned both “to God” and “from idols”; 2) that turning involved worshipping/serving “the true and living God” in contrast to their former idolatry; 3) their faith centers on God’s “Son,” who both died and rose from the dead; 4) and this same Jesus will return, an event for which they “wait”; 5) and that Christ provides salvation from the final judgment, which will be “wrath” for those who face it apart from him.

Notice how much Christian doctrine is included in this partial sentence. All this in a verse-and-a-half!

For the apostle, the gospel was not just information to be shared; it was a life to be embodied, following Christ himself. Paul demonstrated sincere faith that seeks to please God rather than men, selfless service for others, and gentle leadership. See 2:5-12.

Sexual license was rampant in Greco-Roman society. Though there was some lip-service to “traditional family values” among conservative Romans, it was by and large just that: lip-service. Mistresses for married men and regular participation with prostitutes were basically assumed. Homosexuality was common, especially among the Greeks, and often included pederasty. Further, many of the religious cults included sexual acts as part of their “worship.” Sexual purity was an unknown concept.

In such a world, the new Christian movement was genuinely counter-cultural, truly revolutionary. The biblical values regarding sex and marriage from both the Old Testament and the teaching of Jesus would have been brand new to Gentile converts. But the standards are firm, and are clearly the will of God. See 4:1-8

One of the observations quickly made by students of 1 Thessalonians is the many references to the second coming of the Lord. Keep in mind that the chapter and verse divisions so familiar to us were not in the original text. Nevertheless, the fact that Christ’s return is mentioned in every one of the five chapters as we know them shows that this is a major theme of the letter. The return of Christ has been the fervent hope of believers from the first century to today. See 1:10, 2:19, 3:13, 4:15, 5:23

Evidently, some members of the Thessalonian church had died since Paul’s departure, and they were unclear how deceased members of the church figured in the events of Christ’s return. Their questions gave Paul the opportunity to write a key passage to clarify for them, and us, what we hope to experience through rapture or resurrection. See 4:13-18

Even though this gathering of believers had existed only for a matter of months, they had already become a community. Paul calls them to exercise their mutual responsibilities to care for each other, encourage one another, admonish one another, and seek for one another’s good. See 5:11-15

For those who wonder what it would have been like to be a member of one of the earliest Christian congregations, 1 Thessalonians provides a glimpse. There was nothing more important than Jesus Christ: Who he is, what he did, and what he will do. In the meantime, as we wait for his return, what does God want from us? What will happen when he does return?

The first hearers of Paul’s letter wanted to know the same things we do today. This letter of Paul provides valuable perspectives from his early ministry.